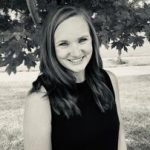 Melissa began dancing at the age of three and began competitively dancing at age five.  Although Melissa spent her earlier years dancing at another studio, Melissa found home at 4th Street Dance Centre at the age of thirteen.  She competed on the Shining Stars and Stars lines as well as solos, trios and small groups.  After finishing her high school dance years, Melissa continued dancing for Winona State University’s dance team.

Since graduating college and starting a family, Melissa  has returned to teach at the studio part time.  Melissa enjoys sharing her love of dance with the younger dancers.  Although she has competed in all styles of dance, Melissa specializes in ballet technique and pointe class.

Melissa lives in Hugo with her husband and two children.  Melissa and her husband Zach met at 4th Street Dance Centre in 2006 and have been together ever since.